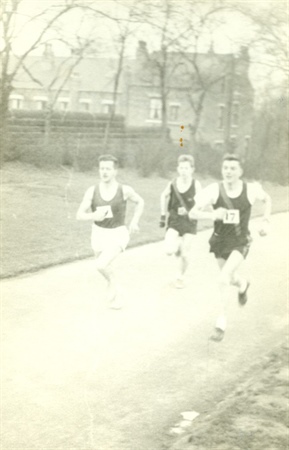 On Boxing Day I met up with Mick Pawson and Keith Harrison at Leeds Athletic Club’s Christmas Handicap, held over two and a half miles in Harehills Park. In “Over the Edge” Charlie befriends an international runner called Sonia Thornton. My older brother, Ken, was a useful middle-distance runner and represented Great Britain in a couple of international marathons. I tried to follow in his footsteps, and was considered promising, but they were wrong. However, I did retain an interest in the sport and used this in the book. The photo shows a youthful me chasing the formation running duo of Arthur Cockroft and Bernard Gomersal in about 1956. Arthur was recently awarded an honorary degree for services to athletics. Bernard moved up a gear and started competing in ultra-marathons (over 50 miles), winning the prestigious Comrades’ Marathon in South Africa in record time. It was good to see them all again.